Holy mackerel!!  Who ever said Singapore was flat?  During a moment of lapsed judgement some many months ago I decided that the next natural race after 5km was the NorthPassion 8km running race up north of Singapore.  I reasoned that my daughter could do the 700m Kids Dash, I need to run 8km as preparation for my forthcoming 10km race in November (another lapse of judgement) and why not do a route in an area that I would never otherwise visit.

Now for a lot of countries a half hour car ride to an event is no big deal.  It takes that long to get to the nearest shopping mall. But in Singapore you can cross the whole width of the country from north to south or vice versa of course.  So anything beyond 15min (which is measuring leaving my condo and going into the CBD) is ludicrous and too far away.

What I didn't take into consideration is that I would have to travel to this location twice.  First to get the race packs and second to actually run the race.  I can handle the drive but in a country where owning a car is pretty much unheard of due to its price points, spending $50 on taxis return to collect a race pack is not necessarily financially savvy.  Either way, the commitment was made so just swallow the cost and carry on.

In a rare moment of my husband's lapse of judgement (and it's exceptionally rare) he chose to join me on this race.  Now John is a tall, slender man, naturally fit and sporty but not a keen runner.  He finds it boring.  I still don't understand why he chose to race with me.  I wasn't going to argue, just jumped on the bandwagon and swiftly registered him.

I have so far entered only two running races, both 5km.  First one was the SAFRA run in August and the 2nd the SMU Mile Race in September.  I have only been running since July (I hated running, I strongly believed I was not made for it and it was sooooooo boring. Blah, blah, blah) mostly because my daughter is only six and I am 44 and till recently quite unfit.  I want to be around for her as a strong, agile and physically fit mum for a very long time.

Anyway race day finally arrived.  We kitted ourselves out with our swanky bright yellow t-shirts, water bottles, Spotify and ear plugs on the ready and cash for taxi ferrying.

The race started on time, pretty relaxed and with an easy pace we set off from Yishun Neighbourhood Park.  The fact that the park was on a hilltop should have been my first warning sign that this race will be different to the other two.  Not thinking anything of it, I set off steadily maintaining an average pace of 6.3km/h.  We had to work our way through a small bottleneck before it opened up on a footpath that ran along a canal for the next 3.5km.  A sea of yellow t-shirts tantalized my viewing pleasure that brought a smile to my face.

Bopping along to Spotify's Running playlist, I happily carried on until I got to the 4km mark (which till now is about as far as I can run without stopping).  Much as I would have wanted to carry on, I was met with my first elevation route.  Protesting quads and knees clearly indicated that whilst the slight hill wasn't so particularly obvious, my legs thought otherwise and I struggled to carry on.  So rather than spoil the race and my mood, I chose to walk it off till I got to the top and then started running again.

However, what I didn't foresee was the next hill and the next hill and the next one.  Darn these hills were worse than my Fort Canning Park race, which I knew was going to be steep and hilly but the hills were in short bursts.  The longest stretch of elevation was along Admiralty Road East which unfortunately was also a very narrow path creating further bottlenecks and difficulties for keen runners to overtake.  Yet again, I walked and as you can imagine my paced dropped to an average 8km/h.

Let me just state though that all along, my dear hubby who has only ever joined me on two short practice runs, is ambling along beside me like an SAS soldier, serene, relaxed and the least bit bothered by the run.

As we reached the 6km mark we grabbed some water at the water station and I was faced with yet another hill.  At this point, I thanked hubby for staying alongside me as much as he did but really now he needs to go off and finish off the race on his own, given that he still has so much left in him. And so he did, bopping along to his own Spotify channel.

Whilst I've not been keen on all the hills, I remained in a very good mood.  Probably because the scenery at this point was quite lovely.  Almost like running through some still untouched jungle, with only small sections of neighbourhood homes occupying some of the space.  Along the way I came across several very large homes, probably closer to mansions at which point I thought: "Ah, this is where you are all hiding."  Because there's not many to be seen near the CBD's surrounding 'burbs.

Prior to Sembawang Park's entrance, I was stoked to see the 7km marker knowing I was on the home run  and promptly took a photo.  Just a little further to go until oh noooo..... another darn hill.  The hill may have slowed me but the best was yet to come when my daughter greeted me at the 7.5km point.  It was priceless.

She makes my heart burst and gave me the energy booster I needed to finish off on a high.  I was grinning ear to ear and just took whatever was left of the run in stride along with the elevation in the last 100m to the finish line.

I came in at 58.42min, keeping an overall pace of 7.15km/h.  I'm not a fast runner and it's still very early days for me but I was satisfied that I had finished no matter which way I had to get there.

John finished a couple of minutes before so he was nicely rested by the time I arrived not that I think he actually broke out in a sweat or ached in anyway.

From here we joined our little girl during her 700m kids dash which I am fairly certain was not that long but no matter she had fun. She was joined by our fabulous nanny, Dilshani, as the guardian (in case we didn't make it in time for her race) and they had great fun together.

Content with our performances, rehydrated and lucky to catch a cab home, we celebrated with dinner at our condo's cafe and a much deserved cold drink. 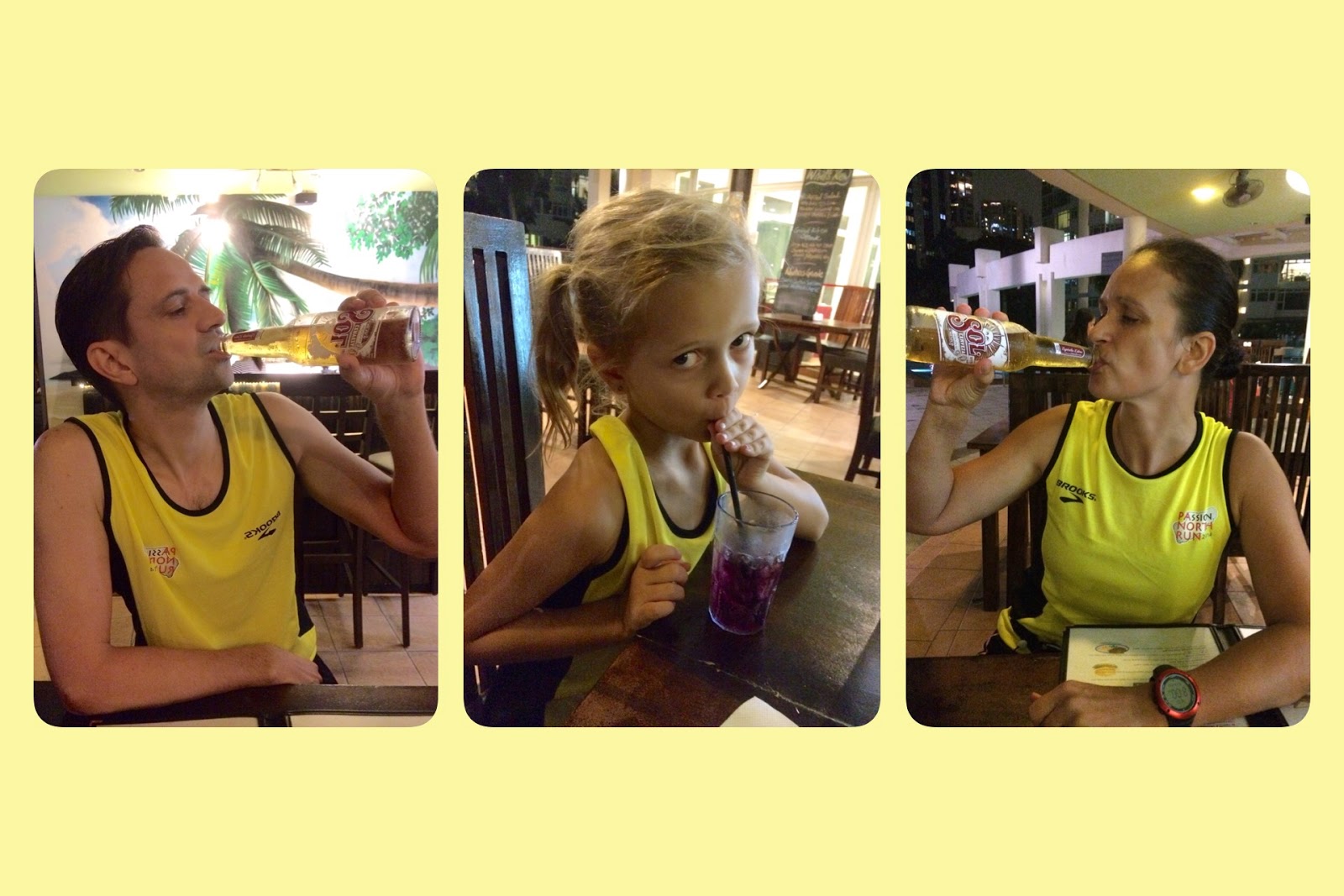 Overall it was a great event.  I thoroughly enjoyed the one-way route.  It was scenic and challenging. My daughter wants to go back to play in Sembawang Park.  It looks like we'll be back for play time. 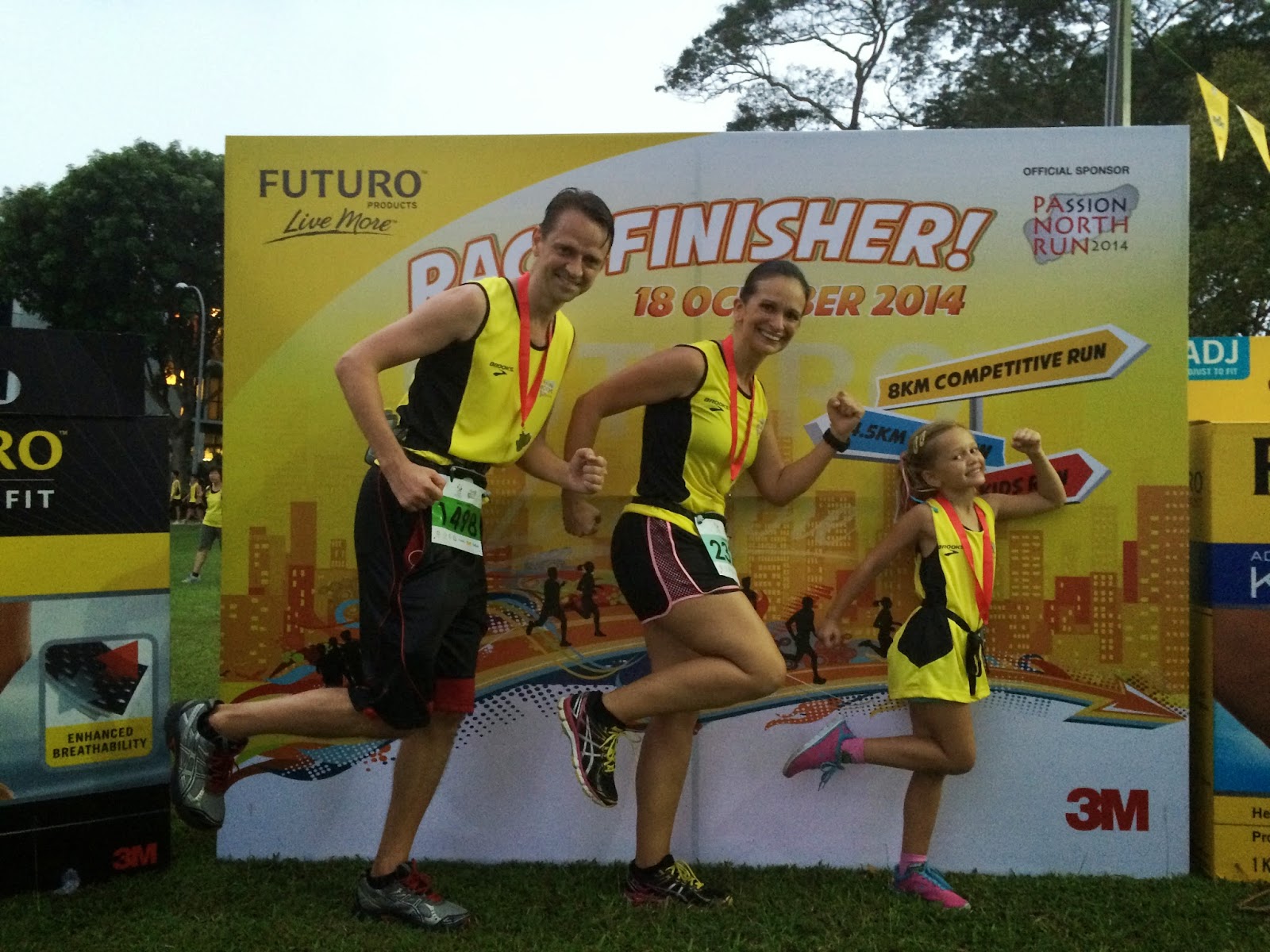 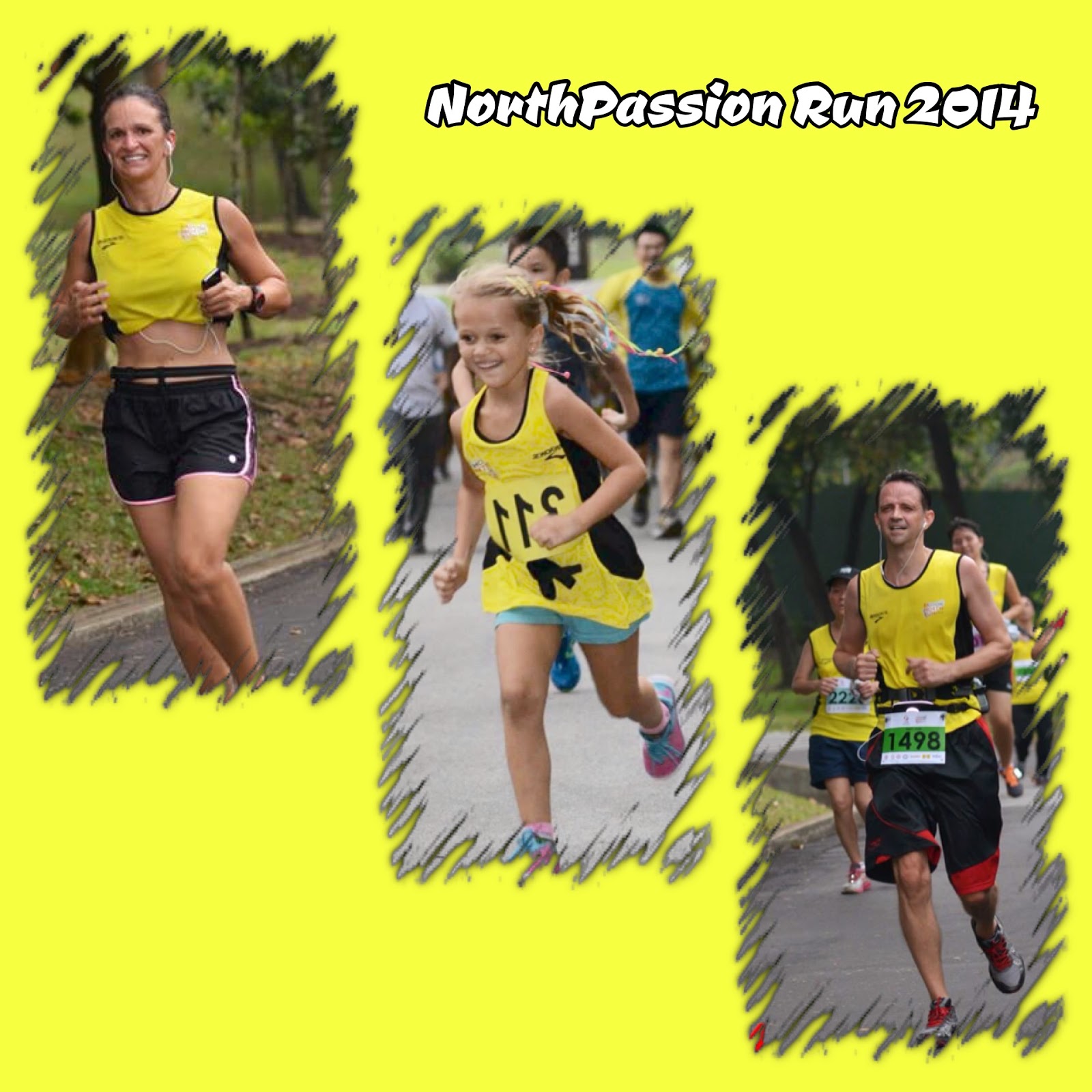